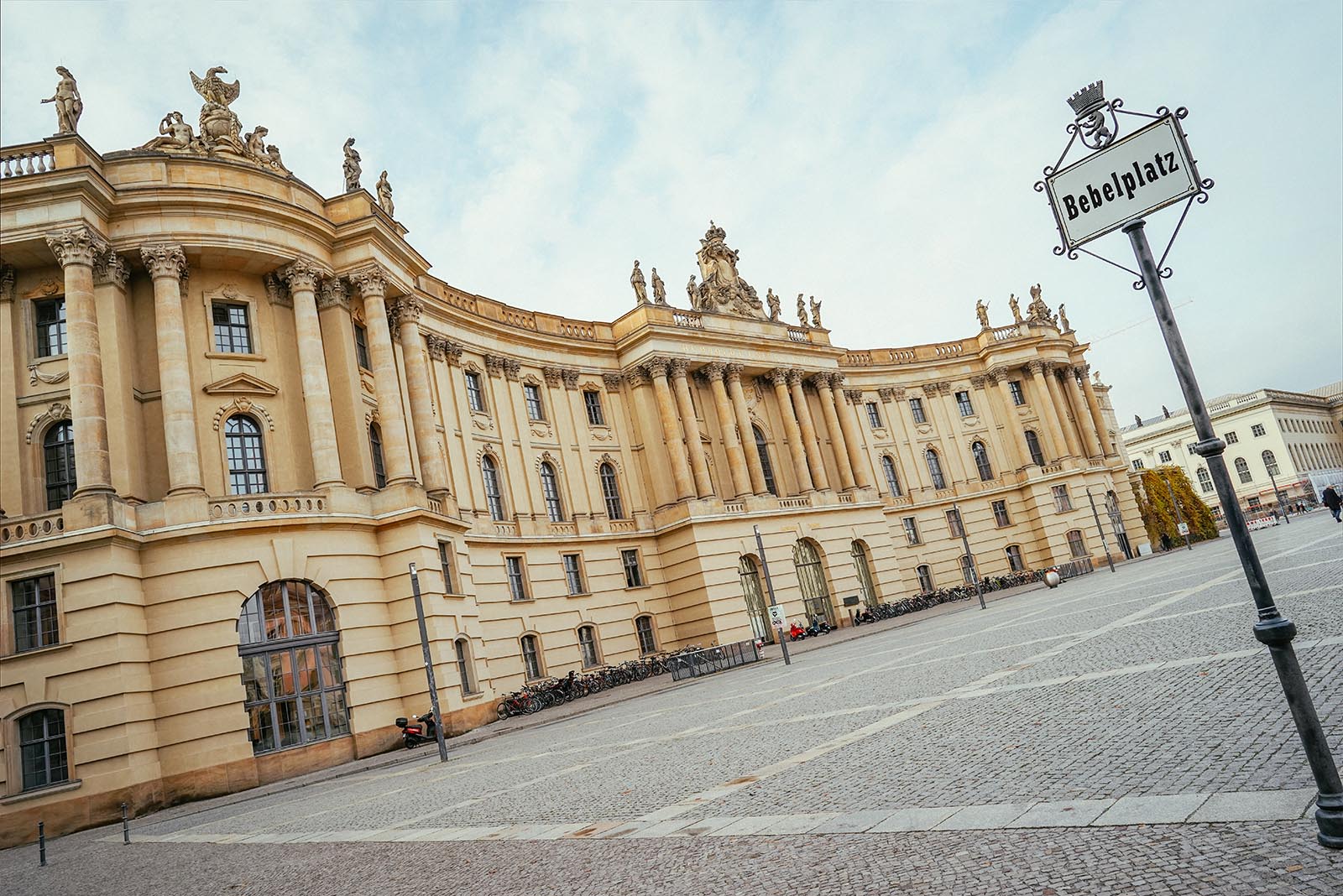 When Prussian king, Frederick II (popularly known as Frederick the Great), ascended to the throne in 1740, he proclaimed that every royal capital must have an opera house to express the cultural side of the monarchy – and must also have a royal library to represent the sophisticated, educated side.

Standing in the middle of what is now known as Bebelplatz, one is immediately absorbed into this ‘Forum Fridericianum’ (Frederick’s Forum), where the Prussian king’s cultural vision came to life through four architecturally impressive buildings that radiate the enlightenment-era doctrine of his once esteemed royal city.

Regrettably, it was here in 1933, following the Nazi seizure of power, that members of the National Socialist German Students’ League publicly condemned the works of various authors considered ‘Un-German’ to an immense funeral pyre. As part of a co-ordinated ritual cleansing – then known as the ‘Day of Action Against the Un-Germanic Spirit’ – that would take place in 21 university towns across the country. 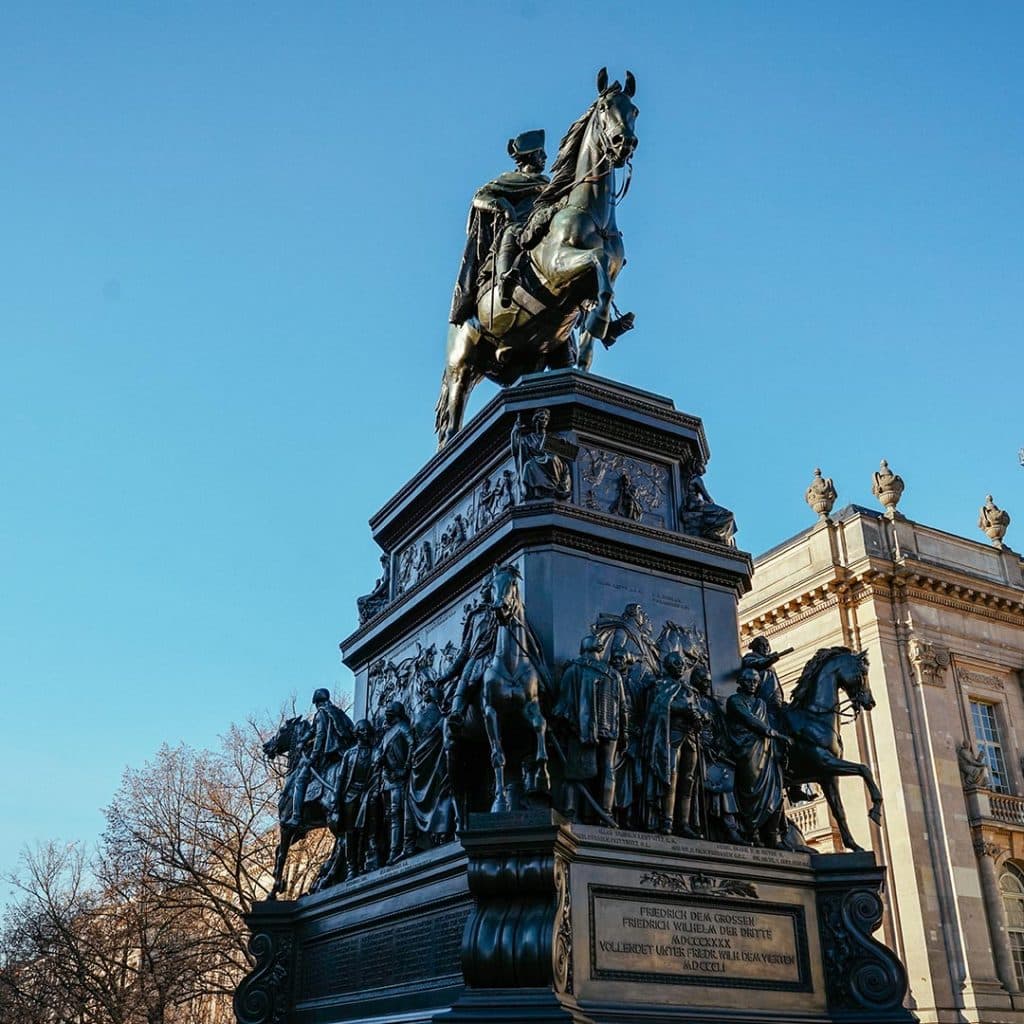 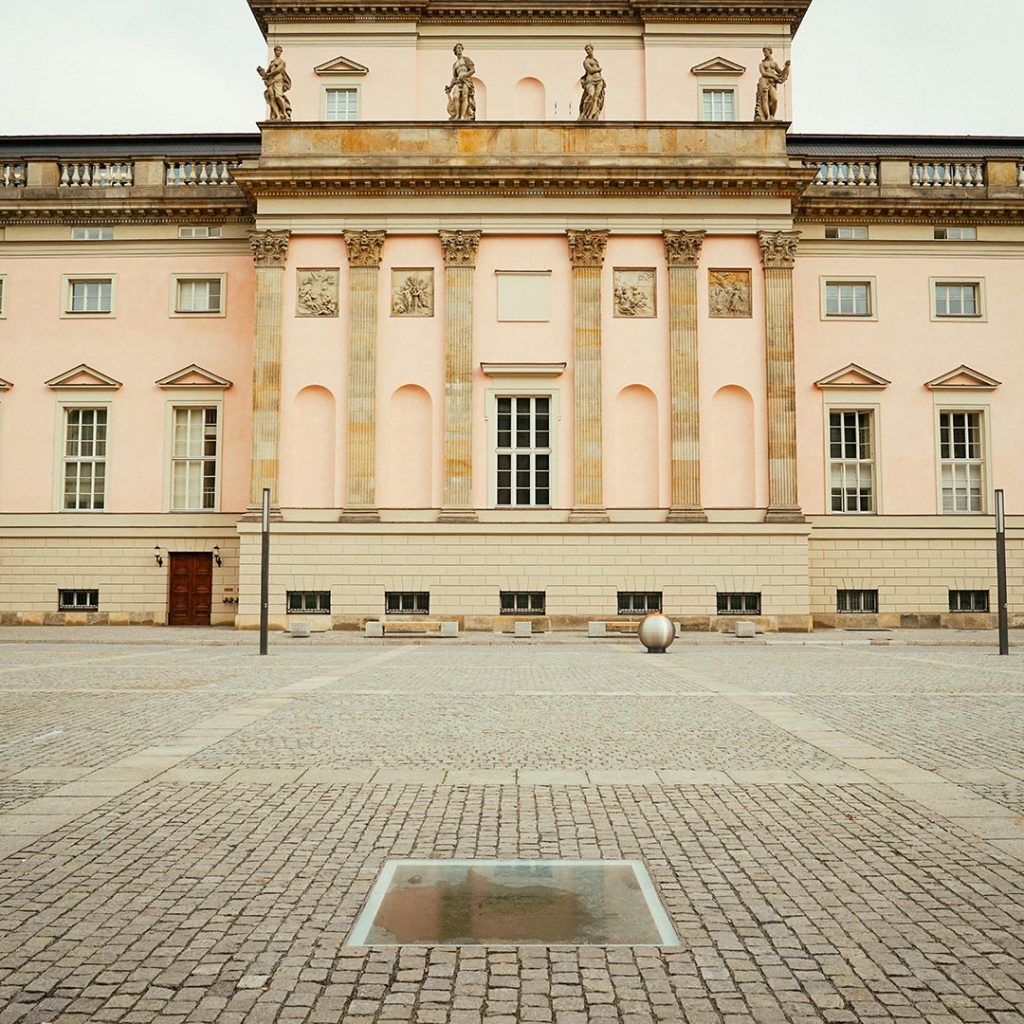 On 10th May 1933, some 40,000 people gathered by the Berlin State Opera, with Nazi Propaganda Minister Joseph Goebbels addressing the crowd before the commencement of this mass immolation: “No to decadence and moral corruption!” Goebbels imploring: “Yes to decency and morality in family and state!

This event is commemorated today by a compelling and poignant memorial, in the centre of the square, titled ‘The Empty Library’ – designed by Israeli artist, Micha Ullman. A vast subterranean collection of shelves, visible through a glass portal allowing visitors to gaze into this vacant space – said to contain enough room for the estimated 20,000 books incinerated on this square in 1933.

At the threat of focusing too intently on the memorial, one must take a moment to understand the historic backdrop and significance of this square. And thus what implication this event taking place here might have – beyond the useful proximity to the university at the time.

In taking the throne in 1740, Frederick the Great sought to establish his legacy as a ‘philosopher king’. Resolving to ensure that not only would the Kingdom of Prussia be regarded as a great power on the battlefield, but would also be known for its cultural greatness. This plaza is definitively the realisation of the latter, and the enlightenment values that Frederick was enamoured with – not only in its architectural elegance but also in what these structures represent.

In 1947, this square was renamed after one of the founders of the Socialist Democractic Workers Party of Germany, August Bebel.

Constructed on the east side of this square during Frederick’s reign, the State Opera House (Staatsoper) (1741-1743) was the first freestanding theatre structure to be built in Germany and considered to be one of the most modern works of its kind. Frederick’s flute teacher would serve as the director of concerts here for much of the 18th century.

On the north side of the square, across the historic Unter den Linden boulevard, is the Humboldt University. Initially built as a palace for Frederick’s younger brother, Prince Heinrich, its use after the prince’s death falls in line with the Prussian king’s vision of high culture and the importance of education. It became the home of Berlin’s first university in the century after Frederick’s death. Here the two famous Humboldt brothers – Alexander and Wilhelm – were tasked with creating a world class institution after the city was conquered by Napoleon’s forces in 1806.

Channeling the enlightenment-era ideas of Frederick the Great, the brothers developed a model of education that would soon spread to other universities across the world. Veering away from the style of learning through repetition and strict adherence to subject matter only considered essential to a student’s official direction – the university would seek to imbue students with a sense of endless curiosity and the pursuit of knowledge for its own sake.

Thus, not only were the students responsible for the book burning in 1933 acting against Frederick the Great’s legacy, but directly shunning the Humboldtian concept of education. Wretchedly replacing worldly sophistication with regimental orthodoxy. The kind that would prove to tolerate no opposition or deviation from its dogmatic absolutism. 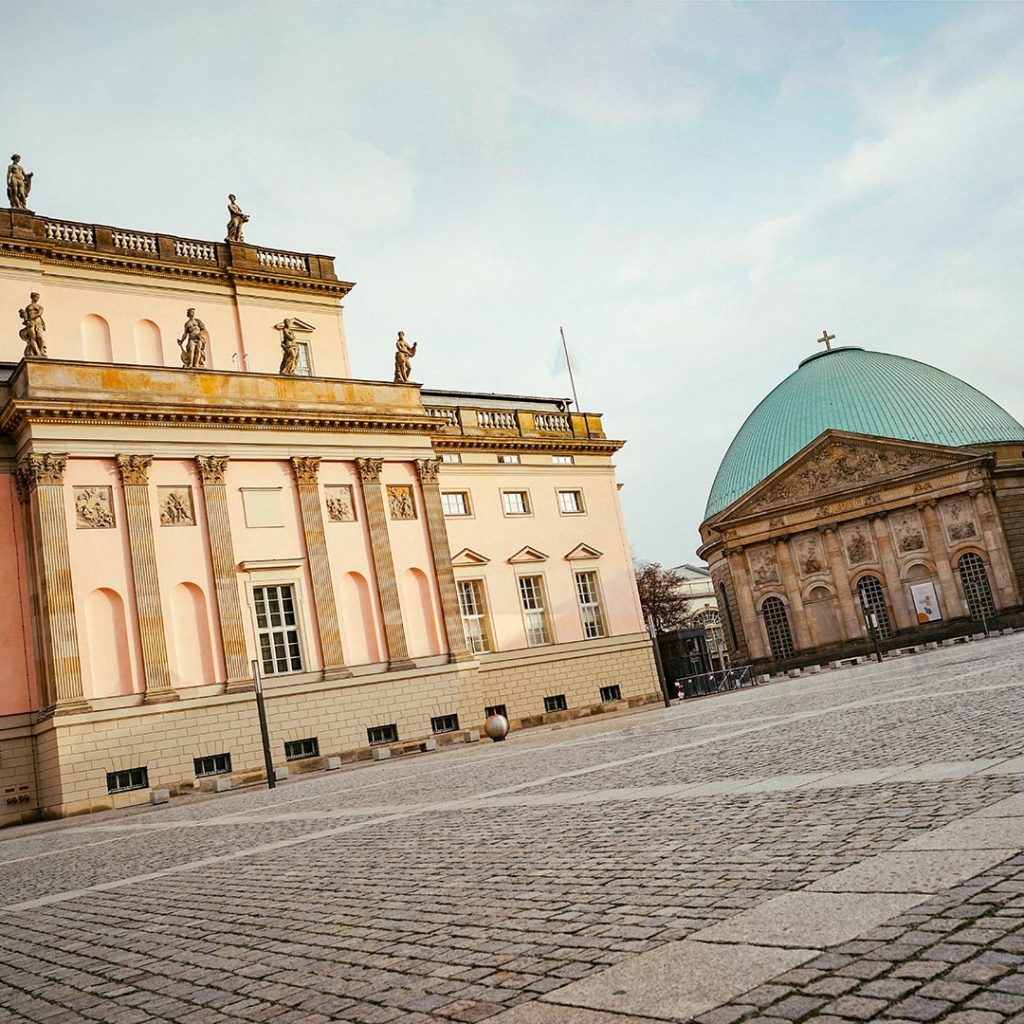 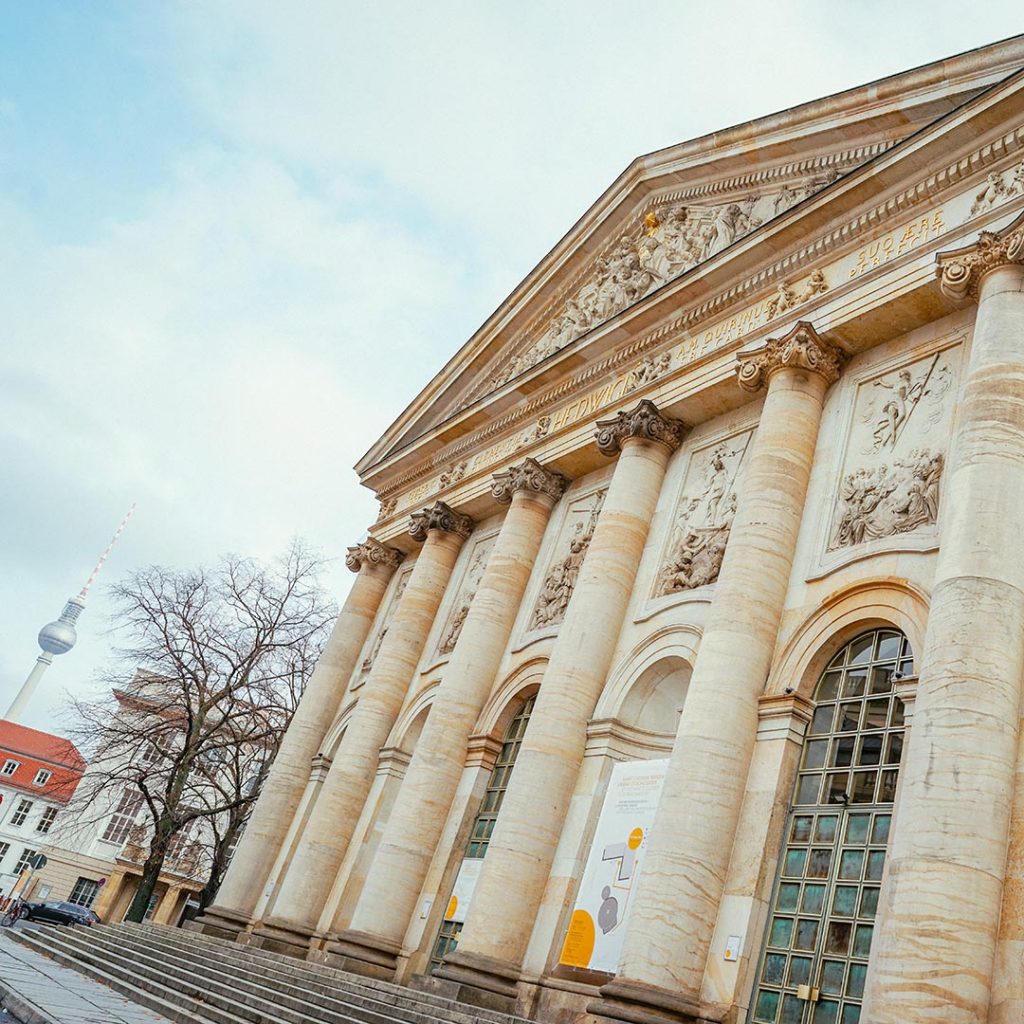 On the southeastern corner of the square, the baroque-styled St. Hedwig’s Cathedral (1747-1773) stands as a symbol of tolerance to Catholicism in the very heart of a predominantly Protestant royal capital. Named after the patron saint of Silesia, it would be the first Catholic church to be built in Prussia after the Reformation.

It was here, following the Reichskristallnacht (Night of Broken Glass) attacks of 1938, that provost Bernhard Lichtenberg publicly lead prayers for persecuted Jews, later speaking out against the forced euthanasia ‘T4 program’ – introduced by the Nazis in 1939. Lichtenberg would pay for his daily dissent with his life four years later. His remains are enshrined in the crypt of this cathedral. Continuing to the west side of the square and straight across from the State Opera House, one finds the Royal Library – another impressively designed baroque structure that was intended to house the sophisticated king’s book collections.

If this impressive ensemble of grand buildings was intended to be a focal point of 18th century Prussian prestige and culture in the heart of the kingdom’s capital, it’s more than astonishing today that the direction shifted so dramatically and now this impressive, tolerant and curious past is overshadowed by one of the most despicable public events to have taken place during the years of the ‘Third Reich’.

The book burning of 10th May 1933 was an ugly demonstration of the suffocating reality of the Gleichschaltung process (Nazification) undertaken by the National Socialist regime after seizing power.

Performed in an area hailed as the heart of 18th century Prussian sophistication, intellectualism and tolerance, to usher in their own ideas of constricting German culture – along with all aspects of society – into a new Nazi straitjacket.