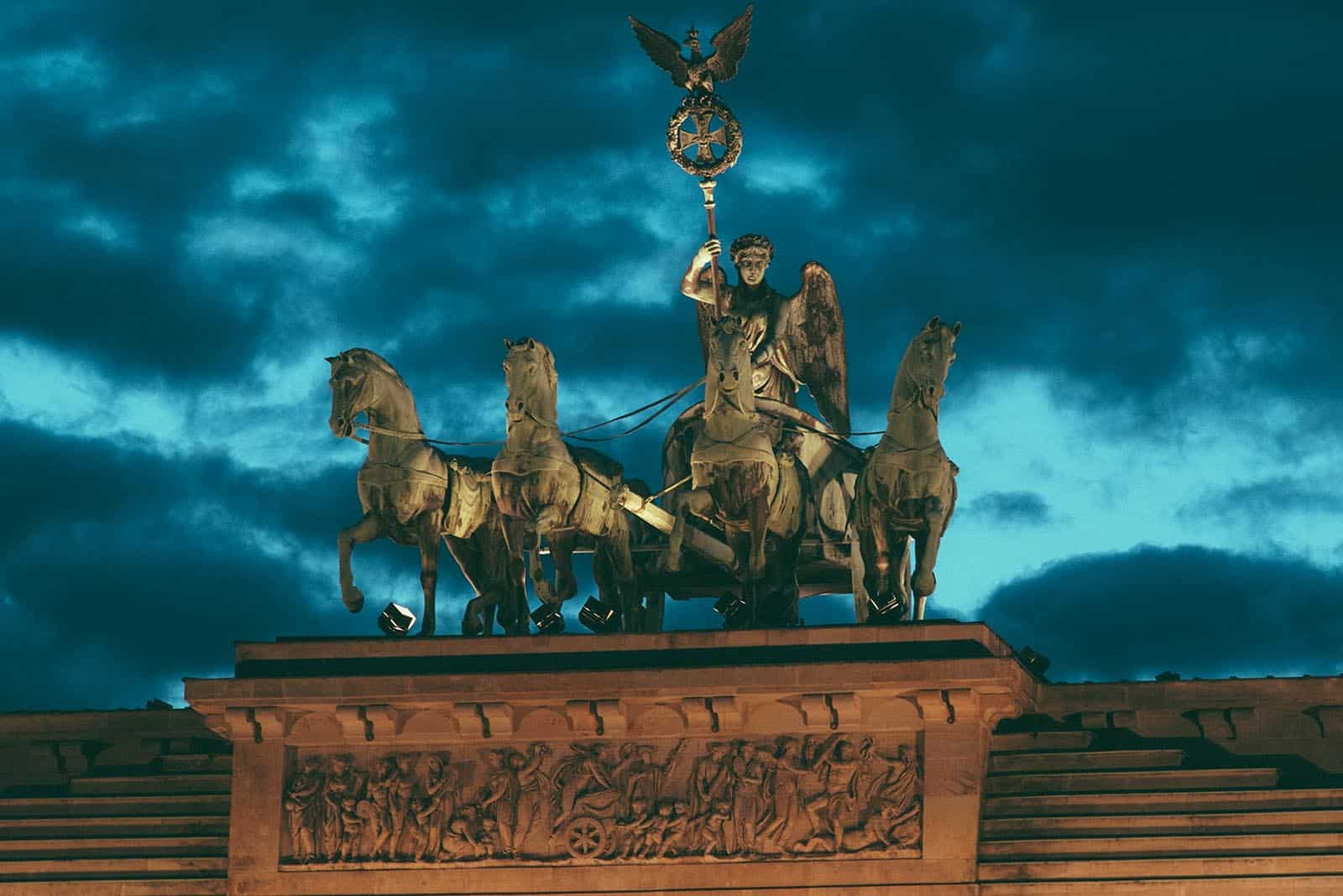 Walk Through The
Brandenburg Gate

Take The Former Royal Route Into The Heart Of Berlin

There is no more meaningful way of entering Berlin’s historic Mitte district than to walk through the central reservation of the Brandenburg Gate.

This glorious twelve-column neo-classical monument – inspired by the Propylaea entrance to the Acropolis in Athens – was erected by the Prussian Hohenzollern monarchy in 1791 as a dramatic ceremonial entrance – a ‘Peace Gate’ (Friedenstor) – into the capital of the Kingdom of Prussia.

It replaced an earlier structure that had been integrated into Berlin’s Customs Wall – and is the only entrance remaining of the eighteen that once surrounded Old Berlin (Alt-Berlin). Until the abdication of the last German Emperor, William II, in 1918, the use of this gateway was strictly regulated. With commoners only permitted to use the outer two lanes either side – and the central passage reserved for royalty.

Now, more than 200 years after its construction, the Brandenburg Gate is open to all – a recognisable icon of the German capital used by thousand of people daily to cross between the two squares of Platz des 18. Marz (on the west side) and Pariser Platz (on the east).

The symbolic shift in the use of this iconic entranceway was made possible only through a series of significant events in Germany’s stormy past – as this monument played its role as a recurring station on the long to parliamentary and federal democracy in the region. Beginning with its peculiar origin story. 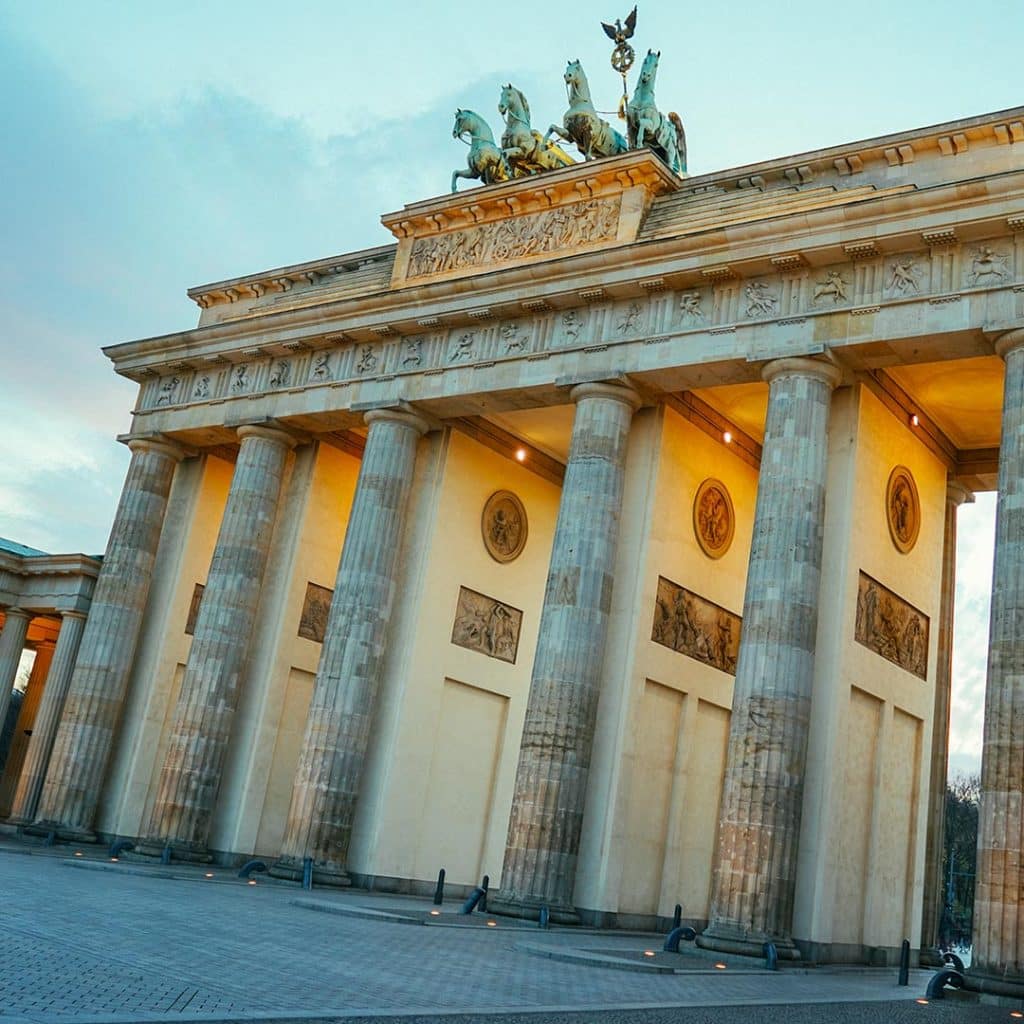 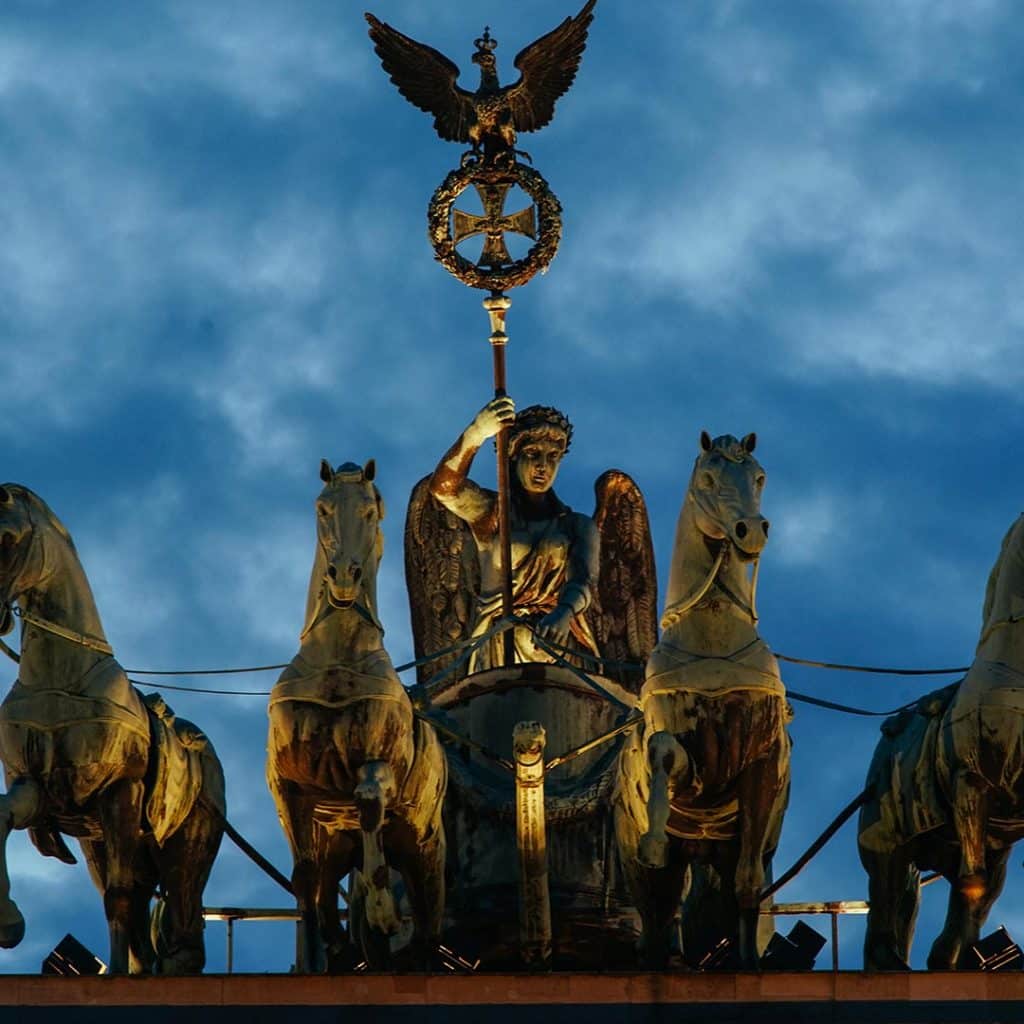 The ‘peace’ this gate was said to originally stand for was unquestionably more a matter of coercive pacification. The kind of peace that is granted by a victor – as King Frederick William II in alliance with his sister, Wilhelmine of Orange, forcibly brought harmony to the Republic of the United Netherlands – through the use of invading Prussian troops.

This convenient distortion would set the stage for the calamities the Gate would endure through the turbulence of future events – as subsequent regimes took to integrate this monument, both geographically and as a recognisable icon, into their own narratives. And the Gate languished in the long shadow of its radix malorum – its fons et origo – the troublesome original sin.

With the unwelcome arrival of Napoleon Bonaparte to the city on 27th October 1806, Berlin would lamentably be forcibly pacified by occupying French forces – a mere fifteen years after the completion of this passageway. The French Emperor entered the city without a shot fired – through the ‘Peace Gate’ – following the routing of the Prussian forces in the twin battles of Jena & Auerstedt.

His success brought about not only the temporary removal of the the four horse drawn chariot – the pale-verdigris Quadriga – atop of the Gate (briefly taken as war booty to Paris before being recovered after Napoleon’s defeat), but a critical reassessment of continental order.

It was on the west side of this Gate in 1987 that US President Ronald Reagan gave his famous speech imploring Soviet leader Mikhail Gorbachev to "Open This Gate" & "Tear Down This Wall"?

The enthusiastic early idealism of the French Revolution that had inadvertently led to the installation of the General of the 18th Brumaire would be revisited following Napoleon’s defeat. Starting in France in 1848, mass public protests swept through Austria and other states before reaching Berlin in March of that year. As demonstrators formed barricades across the city, the Brandenburg Gate became a symbolic choke point in the battle between commoner and crown.

The tenets of Prussian enlightened absolutism would continue – with the central passage remaining accessible only to the monarch plus the remarkable addition of a Prussian General, Ernst von Pfuel (and his family), responsible for returning the Quadriga from French captivity in 1814. The square on the west side of the Gate has been known as Platz des 18. März since June 2000 – after the most significant date of the 1848 protests – although originally it was for a long time simply named Platz vor dem Brandenburger Tor (the square before the Brandenburg Gate).

Not only would Napoleon’s forces march through the Gate onto this square in 1806, but following the French Emperor’s defeat a triumphant procession would pass through the arches as the stolen Quadriga was returned. The Prussian victories in the Wars of Unification brought similar fanfare and later in 1914 soldiers departing westwards – towards the bloodshed and misery of trench warfare in the fields of France and Belgium – would pass through the Gate. It was also here, in 1933, that the Nazis would celebrate Adolf Hitler’s appointment as German Chancellor with a theatrical torch-lit procession that involved units of the SS, the SA, and the ‘Stahlhelm’ veterans’ organisation marching through the Brandenburg Gate. 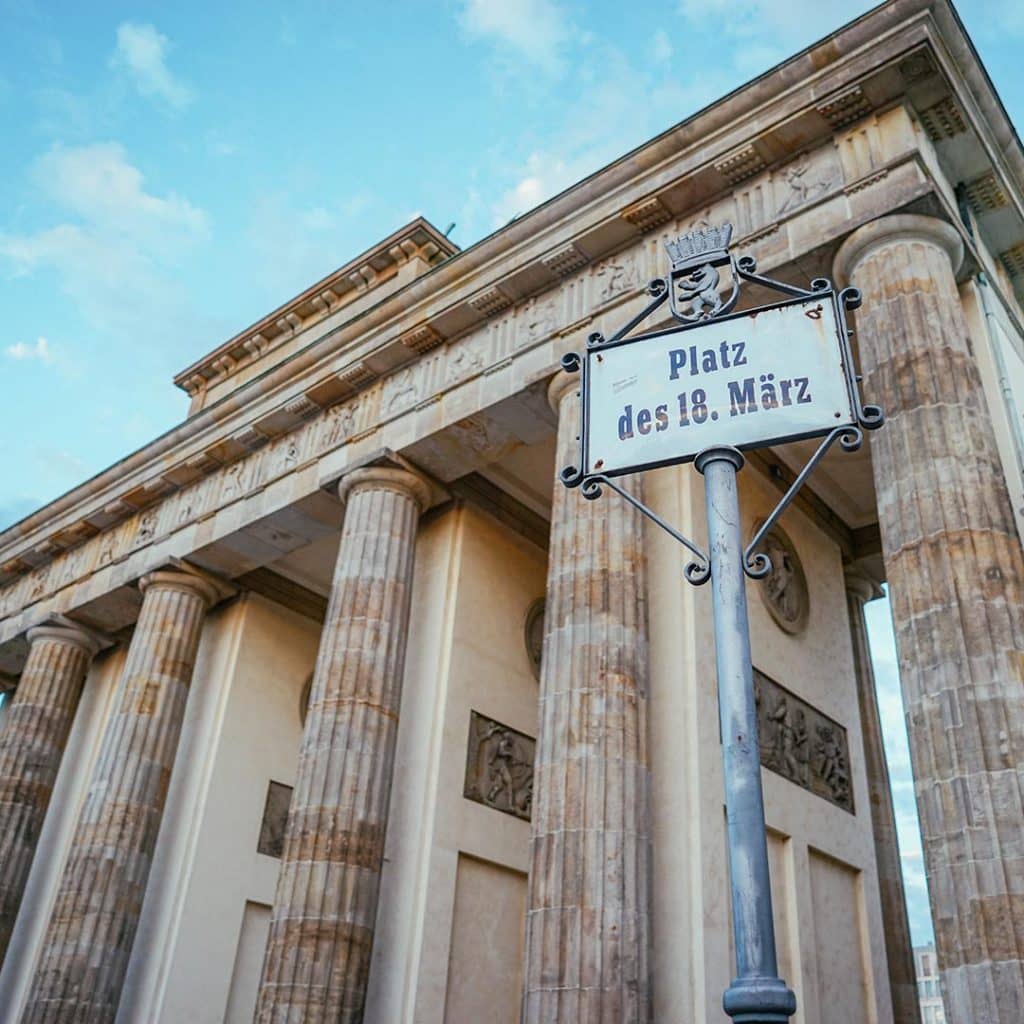 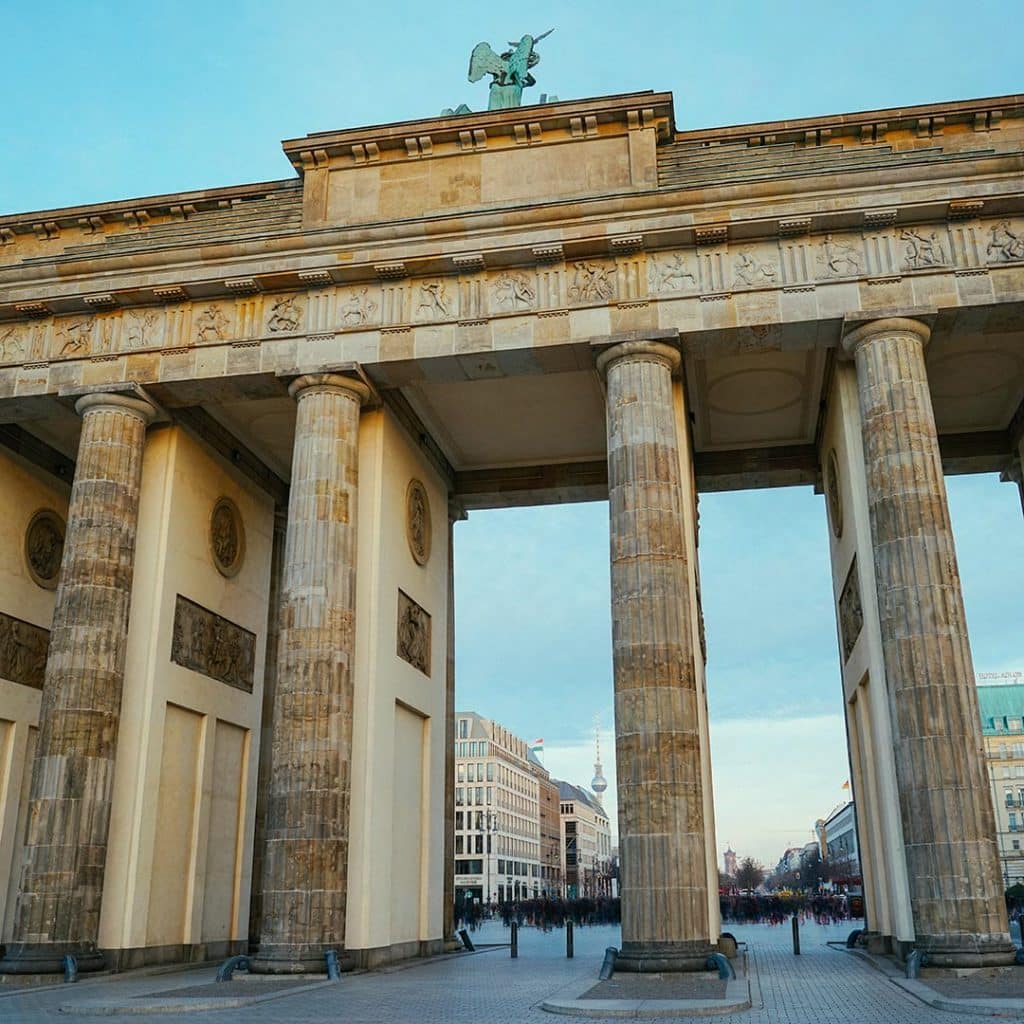 Following the abdication of the German Emperor in 1918 – at the end of the First World War – the central passageway of the Brandenburg Gate was opened for use by traffic. The partition of Berlin, in 1945, meant that the Gate would eventually fall under the control of the Soviet authorities, tasked with administering the central district of Mitte. It was during this period that the flow of traffic through the central arch was restricted until it was completely stopped with the construction of the Berlin Wall in 1961. For 28 years, 3 months and 28 days following the construction of the Wall, the Gate remained inaccessible – stranded in the middle of the notorious East German ‘Death Strip’.

The ‘Fall of the Wall’ in November 1989 finally granted the people of the city full access to the Brandenburg Gate. The result of what is often in Germany referred to as the ‘Peaceful Revolution’. As not only would the calls for changes in the policies of the government of East Germany and the division of the country be expressed using peaceful means – but the regime would wither away without resorting to violence in its dying throes. Perhaps the true moment of redemption for the Gate – and the part is played in that episode of German history.

Through all the changes that have happened around it, the Brandenburg Gate still stands on Pariser Platz – as a symbol of the city’s tumultuous past and an historic landmark for all to visit today.

The monarchy has fallen, the Junkers aristocracy gone. Germany’s imperial ambition contained – and, at no small expense, National Socialism defeated. The frontier is open. With only the horizon to stand as a measure of your exploration here.