On this day: Friedrich Engels, Prussian political theorist and ‘gravedigger of capitalism’, is born (28th November 1820) 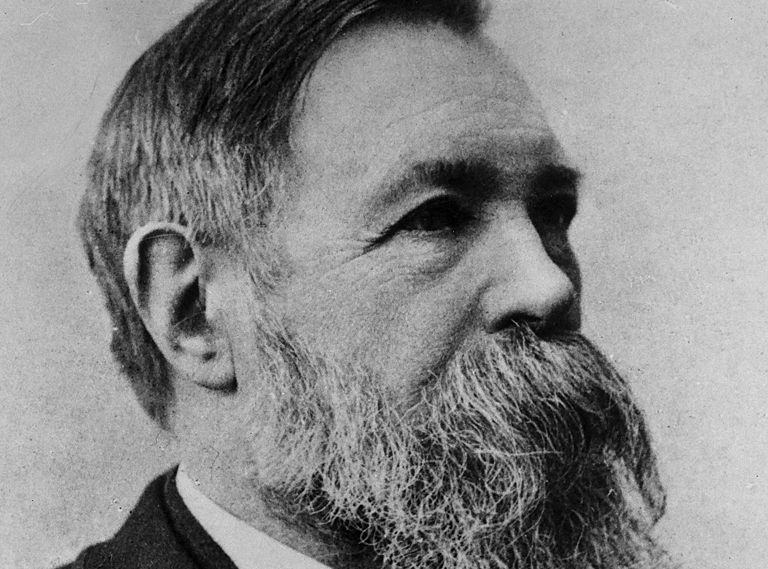 Instead, Engels witnessed the misery and desperation that had arrived on the banks of the river Irk. As the steam engine and mechanised textile production had spread across Great Britain and continental Europe in the early 19th century, a new epoch of industrialisation had arrived. The dilapidation, unsanitary conditions, and personal estrangement threatening public health and gruelling labour, meagre pay, and long hours expected of workers proved hard to ignore.

Born in 1820, in what was then the kingdom of Prussia, the future bearded firebrand was the son of a textile manufacturer and cotton plant owner. He would fail to finish school due to family hardships, instead taking a job in Bremen as an office clerk.

Later, Engels spent time in Berlin, serving for a year as a volunteer in the Prussian Army, as part of the Household Artillery Regiment, which gave him the chance to indulge in a personal interest – that of philosophy.

Whilst in Bremen, Engels read the work of G.F.W Hegel – which affected him greatly. In the Prussian capital, he began regularly attending lectures on philosophy at the University of Berlin and to associate with a group of Young Hegelians.

Writing to his sister, Marie, whilst stationed in Berlin in early 1842, Engels advised that the opera was not very good, however, the theatre was worthwhile, and overall the city was better than Bremen.

Incensed by the poor living conditions and serfdom of factory workers in and around the city, Engels began writing newspaper articles, anonymously published in the Rheinisches Zeitung. Whilst travelling to England in 1842, he would stop in Paris to meet the rabble rousing acting-editor of this reactionary newspaper – one Karl Marx.

It is of lasting historical record that the initial meeting of the two minds left each unimpressed with the other.

Despite the frosty start to their relationship, the two would eventually foster a successful professional friendship as founders of the revolutionary, socio-economical ideology that has since come to be known as ‘Marxism’. Their work geared towards propagating a global understanding of the socio-economic problems which seemed to originate within human nature and organized societies.

Although the lesser regarded of the two Prussian journalists, without Friedrich Engels the works of Karl Marx would have been recognisably lacking.

The rallying cry in George’s Orwell’s dystopian classic Nineteen Eighty Four for instance, channeled through the desperate hand of Winston Smith, that “if there is hope, it lies with the proles” is a call to arms that anyone who has even skirted the periphery of Communist creed will be familiar with. The concept that the proletariat working class, united, will move forward as the foot soldiers of the revolution. So indispensable an idea to Marxist Communist thought, it is Engels who can claim responsibility for influencing Marx to embrace the concept.

Following his encounter with Marx in 1842, the two would meet again in Paris, two years later. By this time Engels had already published a series of articles on ‘The Condition of the Working Class in England’ that made a profound impact on Marx. He would adopt Engels’ idea that the working class would lead the revolution against the bourgeoisie as society advanced toward socialism, and incorporated this as part of his own philosophy.

It would be the first of many major influences Engels would have on Marx and how he would unmistakably shape the destiny of the two men.

The two moved to Belgium in 1845, remaining there for three years. Shortly after their arrival, they initiated contact with the communist underground and were essential in convincing the leadership to operate in the open as a political party. Following Engel’s pointed critique of the organisation’s purchase glucophage online poorly formed manifesto, both Marx and Engels were commissioned to write a pamphlet explaining the principles of communism. Published in 1848 this became The Manifesto of the Communist Party, better known as the Communist Manifesto.

Engels had served as the guiding hand in Marx’s involvement, and although the final draft was eventually penned exclusively by Marx, according to biographer Francis Wheen, the latter spent most of his time engaged in “ceaseless procrastination”.

Eventually, both Marx and Engels moved to London, England, transferring the headquarters of the Communist Party across the English Channel with them. Marx devoted himself to the task of organising working class revolutionary action and writing for the New York Tribune. He lived much of this time, with his family, in extreme poverty, supported by Engels, who derived much of his income for his family’s business.

When Louis Bonaparte seized power in France in 1851, carrying out a coup against the French government and making himself president for life, Marx responded by submitting a satirical essay to the New York Tribune entitled “The Eighteenth Brumaire of Louis Bonaparte” – in reference to the date of the coup, according to the 1799 republican calendar of France – a characterisation borrowed from Engels.

Similarly, Marx’s permutation of Hegel’s notion that history is repeated twice, featured in the first paragraph of the essay as “once as tragedy and secondly as farce”, was Engel’s contribution.

Nevertheless, Engels, ever possessing a streak of modesty in regards to his contribution to the development of Marx’s political theories, was always prepared to defer to Marx’s dominant voice and character. He would remark on Marx’s death that, “just as Darwin discovered the law of evolution of organic nature, so Marx discovered the law of evolution of human history.”

More than 150 years have passed since the publication of the Communist Manifesto. The ideas promulgated within, and elaborated on, by the two authors until their deaths certainly left an indelible mark on the many years that followed.

What responsibility should Engels, and Marx for that matter, bear for the ‘great ravaged century’? For the crimes subsequently carried out in their names by the Stalins and Dzerzhinskys of the world?

The streets of Berlin provide some interesting answers to the question of liability and guilt. As the city fell under the control of the Nazi regime in 1933, an active campaign to rename the city avenues, squares and neighbourhoods was undertaken. The names of Hitler, Horst-Wessel and Göring adorning the landscape would pay homage to the political order.

With great diligence the de-Nazification of the city, East and West, post-war was extended to the systematic removal of these endorsements from the map.

Following the fall of the Berlin Wall in 1989 and the re-unification of Berlin, efforts to erase another controversial chapter from the streets of the city were met with more dissent. Walter Momper, the city’s Social Democratic leader, remarked on the zeal the opposing Christian Democratic Party were prepared to apply to the removal of DDR approved names that the party: “apparently feels the need to defeat Communism anew every day.”

Engel’s name is still visible in Berlin in the Friedrich-Engels Gymnasium, a high school in the district of Reinickendorf and the Friedrich-Engels-Kaserne, a former Prussia barracks house, during the Cold War home to a special guard unit of the East German People’s Army.

The full audiobook version of The Communist Manifesto

Excerpts from Lenin’s biography of Engels: