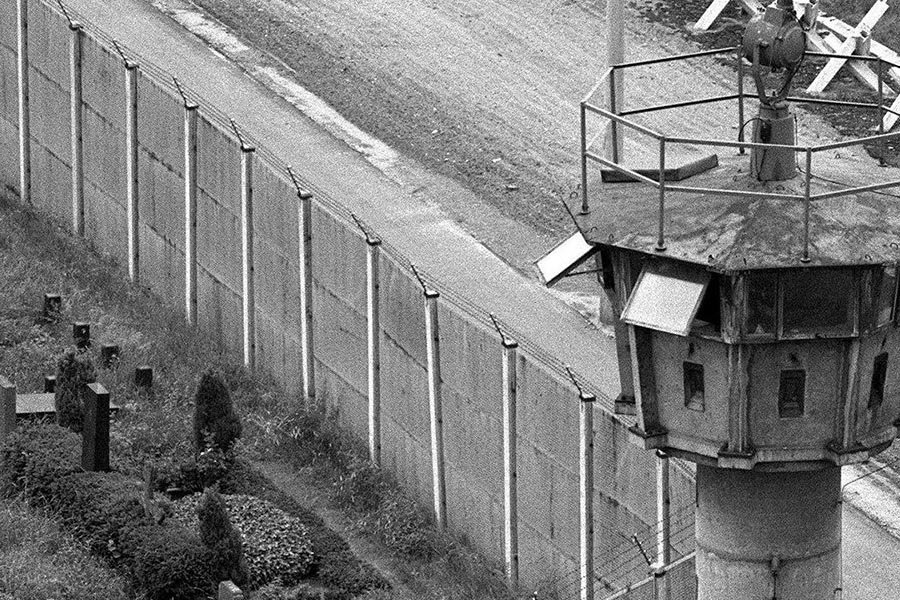 On a crisp autumn evening in 2014, I stood overlooking the path the Berlin Wall once traced as it wound around the British, French and US occupation zones of West Berlin like a concrete lariat. Breaking with precedent established at previous muted celebrations, the German government had decided to organise a unique spectacle to mark the 25th anniverary of the sudden & unexpected redundancy of the world’s most famous wall.

On 9th November 2014, thousands of illuminated balloons on slender stands, stood equal height as the former internal barrier of the German Democratic Republic, lined a 15km route through Berlin, passing the site of the main ceremony at the Brandenburg Gate. Following perfomances by Peter Gabriel and Udo Lindenberg, and to the strained tones of a rendition of Beethoven’s 9th Symphony, the balloons were released one-by-one to soar into the night-sky.

Like many others stood watching, I had convinced myself, with little evidence to inform the judgement, that once released the balloons would fly off into the sky still illuminated. Rising beacons offered to the darkness, collectively soaring into the great unknown, like the millions of people emancipated by the winds of change that swept across the continent in late 1989. Instead, as the co-ordinated release took place, these unlit white spheres simply veered into the night-sky and the fog that had that evening descended on the city. An analogy to the eventual re-unification of the country that took place in 1990? The growing suspense, a brief fleeting moment of false hope and then off into an unpenetrable fog without light for guidance? Let’s not get too melodramatic.

Although, the federal states of re-unified Germany that once made up the German Democratic Republic still have a long way to go before ‘catching up’ with their western counterparts. Unemployment remains higher in the east than west, the gross domestic product per head is two thirds of that in western Germany, and the so-called ‘solidarity tax’ designed to revitalise the east continues to polarise opinion. The road to re-unification continues. Celebrations for the official re-unification of Germany take place every year in October, a nationwide holiday that co-incides with the date the re-unification process was completed, 3rd October 1990.

Celebrations on 9th November have long been muted, due to the number of troublesome events that have fallen on that day. Often refered to by historians as the ‘Schicksalstag’ (Day of Fate), as the great roulette wheel of destiny has spun, this certain day in November has consistently come up trumps.

1918 – The Abdication of the German Emperor 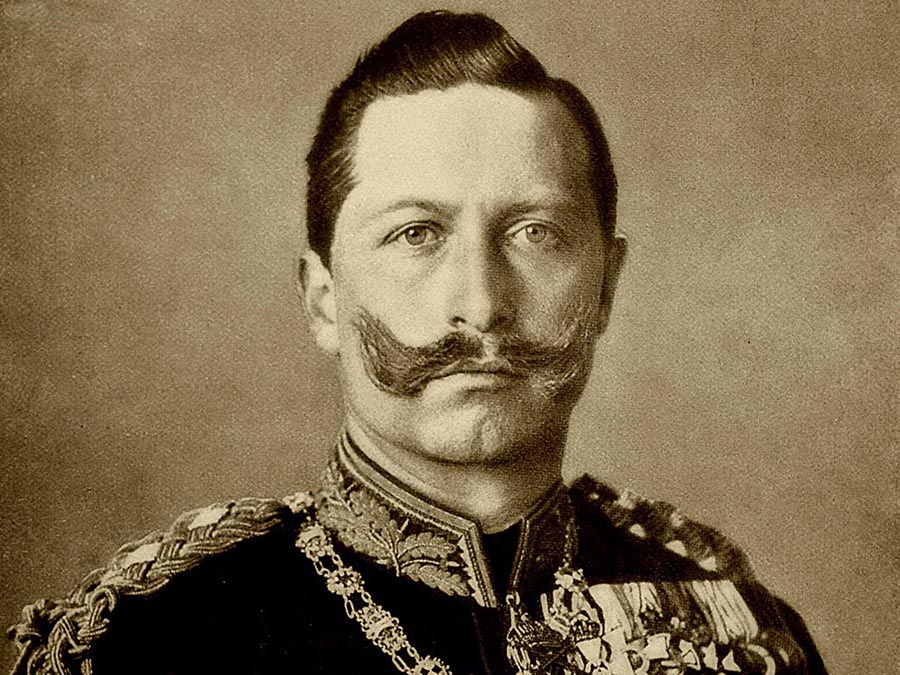 As the war that many had declared would be ‘over by Christmas’ stretched on, first into months, then into years, unrest grew in Imperial Germany. Well over a million German men would die before the cessation of hostilities in November 1918 brought World War One to a close. Over 4 million would be wounded; one out of every eleven Germans would become a casualty of the conflict.

After a failed summer offensive in 1918, the German army was on its last legs. Exhausted from four years of gruelling warfare and with the Western allies making sufficient gains to finally threaten German soil. Calls for the German Kaiser, Wilhelm II, to bring an end to the war were growing on the home front and a future with a monarch tainted with such disastrous failure seemed more and more uncertain. As Germany’s military success looked less and less likely, Wilhelm’s popularity amongst troops would begin to be seriously brought into question. When he inspected soldiers in 1917, the men were ordered to unload their weapons and hand in their bayonets for fear of an assassination attempt.

Wilhelm initially refused the idea of abdication, joining the military command in Spa, Belgium, he said: “A successor of Frederick the Great does not abdicate.” Whilst debating his course of action on 9th November 1918, considering vacating the position of German Emperor, but retaining his title as King of Prussia, Wilhelm received a call from Berlin. Chancellor Maximilian von Baden – cousin to former French Emperor Napoleon III – had pre-empted the Emperor’s decision and announced Wilhelm’s abdication, acting on his own accord.

Earlier in the day, Social Democrat Party deputy, Philipp Scheidemann, had broadcast the Kaiser’s departure from a balcony on the Reichstag building and proclaimed the start of a German Republic. Wilhelm went into exile in Holland, eventually signing his official abdication proclamation on November 28th 1918. He would remain in Holland until his death in 1941. As author Alexandra Richie notes in Faust’s Metropolis, the abdication of the Kaiser left one of the great questions of German history unanswered: if the monarchy had survived in some form, would Germans have poured their dreams and ambitions into Hitler only a decade later? 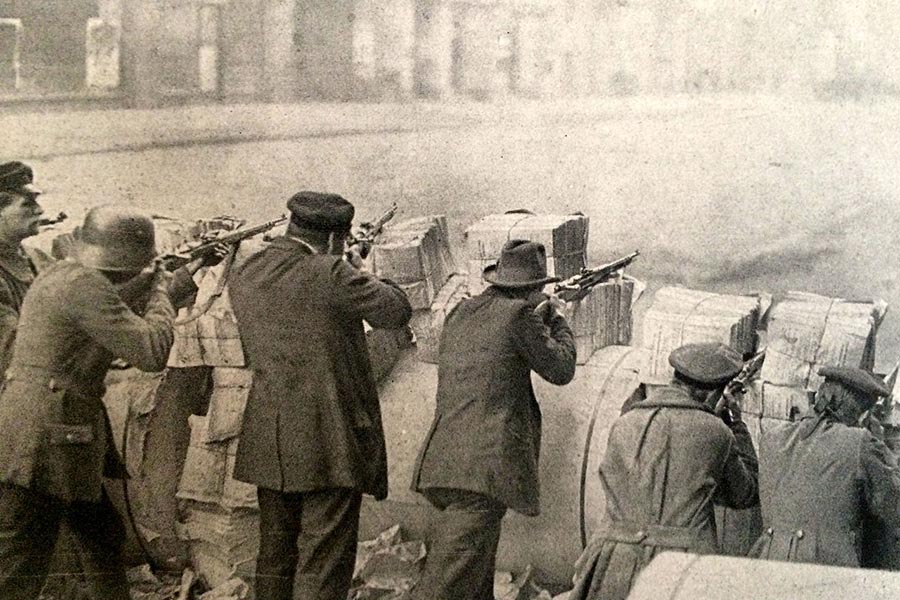 Two hours after Scheidemann’s proclamation of a German republic from the balcony of the Reichstag building, the leader of the Spartacus League (predecessor to the German Communist Party), Karl Leibknecht, declared a “Free Socialist Republic” from the portal of the city palace. The very same balcony had been used by Wilhelm II in 1914 to announce the mobilisation of German forces to fight against Russia.

Scheidemann had been alerted to Liebknecht’s intentions earlier in the day and, hoping to avoid a coup rushed from the canteen in the parliament building, leaving his half-finished pea soup on the table, to announce the establishment of the German republic to a crowd gathered outside.

“Workers and soldier, be aware of the historical meaning of this day,” Scheidemann said. “The old and rotten, the monarch, has collapsed. Long live the new, long live the German republic!”

A revolution in name alone, the events of 9th November 1918 had been little more than a transfer of power. The Social Democracts hoped to ignore the intentions of Liebknecht and his fellow communists, forming a legitimate government in the wake of Scheidemann’s hasty proclamation. The violence that would follow as the two groups vied for real power would define the next decade and establish the conditions that led to the Nazi seizure of power in 1933. 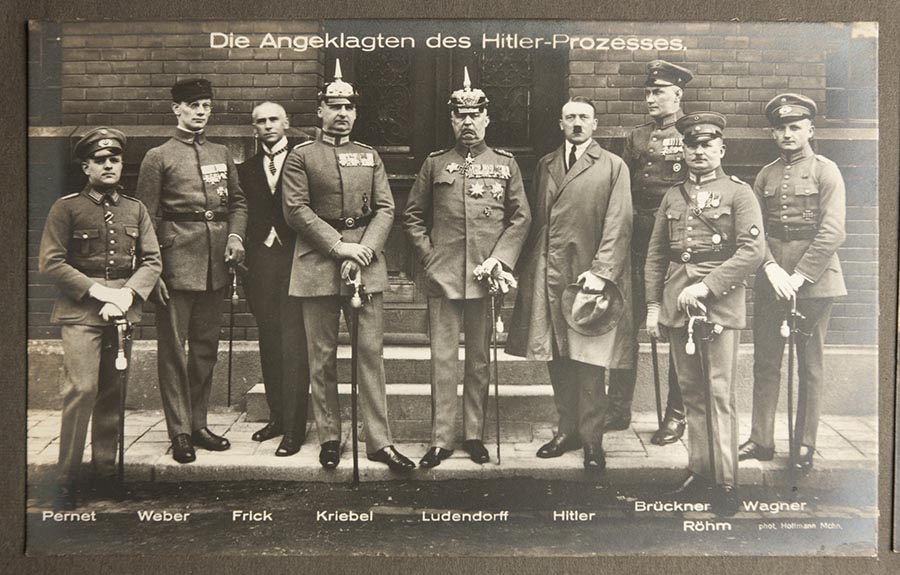 Inspired by Benito Mussolini’s successful March on Rome in 1922, Nazi party leader Adolf Hitler planned to use the southern capital of the state of Bavaria, Munich, as the base for a march against the SPD dominated Weimar Republic government in 1923.

With only around 35,000 members, the Nazi party remained a fringe right-wing movement, and in the last general election, held in 1920, had not won a single seat. Insufficiently prepared, Hitler gathered allies in the Bürgerbraukeller, one of Munich’s largest beer halls, on the 8th November. Attempting to march throught the streets of the city the next morning, the two thousand strong crowd was confronted by police, leading to the deaths of 16 Nazis and four policemen.

Hitler fled and was captured two days later. Charged with treason he was sentenced to five years in Festungshaft (fortress confinement), along with Rudolf Hess, where the two would write Hitler’s manifesto, Mein Kampf. He served little over eight months of his sentence and was fined 500 Reichmarks. Following the failure of the putsch, Hitler resolved to alter Nazi tactics, prefering instead to campaign on a legitimate political platform, rather than depend on violent revolutionary methods. An increased reliance on propaganda and the insistence of maintaining a credible democratic facade would produce a legal movement for change. The ninth of November (Die Neunte Elfte) became one of the most important dates in the Nazi calendar from 1933. Annual nationwide ceremonies would take place to commemorate the fallen of the Beer Hall Putsch, with Hitler addressing the Alte Kämpfer (Old Fighters) in the Bürgerbraukeller on the 8th, followed by a re-enactment of the march through the streets on the 9th November. 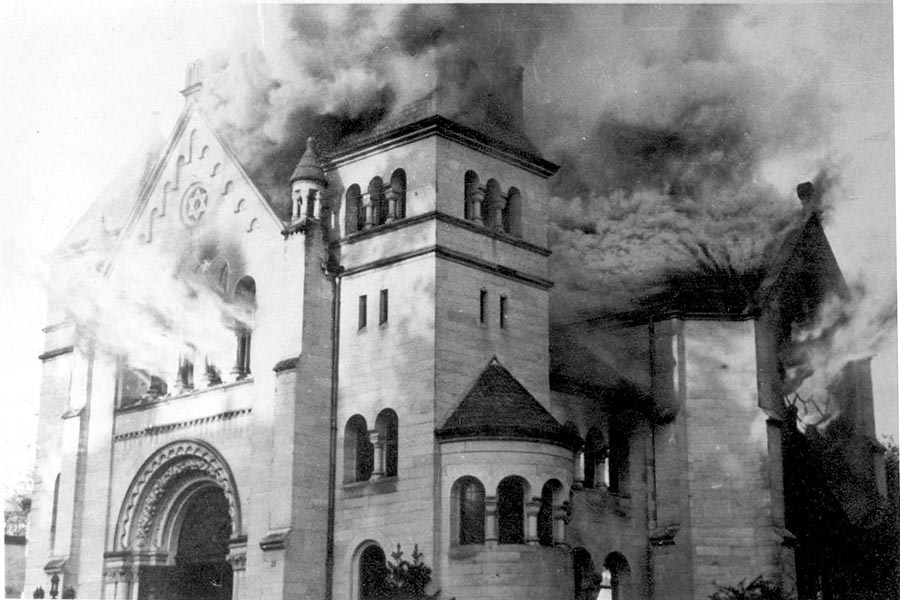 Official discrimation against Jewish Germans was evident from the Nazi seizure of power in 1933. Co-ordinated violent attacks on Jewish property and persons were however uncommon, according to journalists of the time “like summer thunderstorms” – remarkable but temporary and no great indication of the overall season.

The large scale attacks carried out on 9th November 1938, known as the November Pogrom or Reichskristallnacht, would serve as a watermark for the period, as the legal persecution of Jews during the early years of National Socialist rule transformed into the butchery and industrialised horror of the Holocaust.

The pretext for the attacks was the assasination of a German diplomat, Ernst von Rath, by a German-born Polish Jew living in Paris, Herschel Grynszpan. Distressed by the expulsion of his parents from Germany in October 1938, to be left in squalor on the Polish border, Grynszpan bought a revolver and arriving at the German embassy in Paris asked to see an embassy official. Taken to von Rath, he fired five bullets at the professional diplomat, two in the abdomen. Von Rath died of his wounds on 9th November 1938.

Two hours after the news of von Rath’s death reached Germany, riots broke out across the country, and in Austria, instigated by the Nazi propaganda minster Joseph Goebbels. Hitler was attending a dinner to honour the victims of the 1923 Beer Hall Putsch when he heard the new of von Rath’s death. Over 1,000 synagogues were damaged and destroyed, more than 7,000 Jewish shops attacked and 29 department stores ruined.

More than 30,000 Jewish men were arrested and taken to concentration camps; primarily Dachau, Buchenwald, and Sachsenhausen. The number killed in the two-day riot is most often cited as 91 before the violence was officially called to a halt by propaganda minister Joseph Goebbels.

If you are interested in learning more about the ‘Day of Fate’ in Berlin or want a better understanding of the impact these events had on German history: We offer private guided tours of Berlin, on subjects such as the Cold War period, the Third Reich, Jewish Heritage and also tours to nearby Sachsenhausen and the palaces and gardens of Potsdam.

All Posts »
PrevPreviousBerlin’s Days of Jewish Culture
NextOn this day: The Bundeswehr is born (12th November 1955)Next