It was at this very minute (7:50 pm) 75 years ago today - on 22nd November 1943 - that the most devastating Royal Air Force raid carried on out the then-Nazi capital of Berlin began. When a stream of more than 700 bombers flying from the south of England, descended on Berlin.

A stream of more than 700 bombers – Lancasters, Halifaxes, Sterlings and Mosquitos – flying from bases in the south of England, descended on Berlin from the west, dropping just over 2,500 tons of ordnance – in the largest attack then carried out in the Battle of Berlin. A record tonnage for a raid on any capital city so far in the history of air warfare. The attack lasted for only half an hour – from 7:55 pm until 8:25 pm local time, but by the morning of the next day Berliners awoke to learn of the disastrous fate of many of the city’s famous landmarks – and thousands of their fellow citizens. 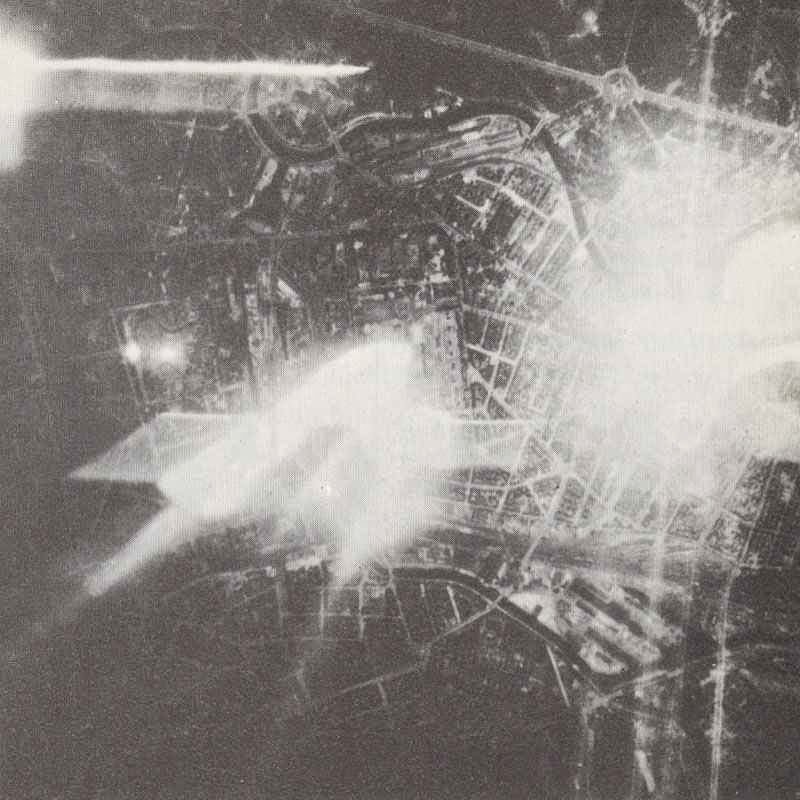 Ten churches, including the Kaiser Wilhelm Memorial Church in West Berlin, were left in ruin. Many embassies on Unter den Linden were bombed out. The world-renowned KaDeWe department store suffered a direct hit from a crippled British bomber that crashed through the ceiling. Two hospitals, numerous railways stations, many museums and theatres were also severely damaged – along with the West Berlin Zoo. Not to mention the civilian housing across the city. Not all of the targets were innocent; Albert Speer’s private office and War Industry Ministry was hit; the Naval Construction headquarters; the barracks of the Garde du Corps on Spandauer Damm; and even Adolf Hitler’s private train (although the Nazi leader was not present in the city at this time). The RAF bomber crews reported a large explosion in the city, witnessed from 18,000 feet above, that turned out to be a direct hit on the Neukölln Gasworks. Incidentally due to the mist and drizzle that had also descended on the city that night, Berliners would see little of the planes except those that came crashing to the ground.

This would be one of three huge raids conducted over the next five days; with Lancaster bombers returning to Berlin on the night of the 23rd – 24 hours after the original attack. Many of the same features of the previous evening would be repeated, although with a reduced number of planes. This time the Neue Synagoge, the Kaiser Wilhelm Museum, the former British Embassy, the offices of the Waffen SS, and the State Kriminalamt would be either destroyed or seriously damaged. The third major raid on the night of the 26th would see the suburb of Reinickendorf suffer, and ordnance concentrated on the centre of the city and the Siemensstadt.

Earlier raids on Berlin that year had served largely symbolic propaganda value, rather than inflicting the extent of damage of the November raids. On 30th January 1943, the ten year anniversary of the Nazi seizure of power, two attacks would coincide with speeches set to be broadcast live by Luftwaffe Chief Hermann Göring and later in the day Propaganda Minister Joseph Goebbels. The arrival of squadrons of De Havilland Mosquitos successfully disrupting the festivities. Similarly on 20th April 1943 – Adolf Hitler’s birthday – RAF Bomber Command dispatched more Mosquitos to successfully harass the city’s inhabitants and mark the occasion.

Diligent city officials would eventually compile a list of the damage inflicted on the city over these five nights in November 1943: 8,701 buildings containing 104,613 individual apartments were completely destroyed. 4,330 people were killed, although not including 105 people crushed to death after panicking in an air raid shelter in Neukölln. Over 400,000 people would be bombed out of their homes with the district of Tiergarten – that had the misfortune of being in the path of the bombers every time they approached from the west – most affected.

As part of the ‘Battle of Berlin’ fought over German skies by the Royal Air Force from November 1943 to March 1944, these major raids aimed to strike a blow to the heart of the Nazi regime – Berlin was attacked no less than sixteen times with immense damage inflicted. Air Chief Marshal Sir Arthur Harris, head of RAF Bomber Command, would predict: “It will cost us between 400 and 500 aircraft. It will cost Germany the war.” Yet, despite the success in diverting essential military resources away from the fighting in the east, targeting the nerve centre of Nazi power served ultimately to draw attention away from the real motor of German industrial production and the war economy – the Ruhrgebiet.

The Battle of Berlin attacks would eventually cost 492 aircraft, their crews killed or captured and 954 aircraft damaged. Exceeding the 5 percent threshold considered by the RAF to be the maximum sustainable operational loss rate. Popular consensus among historians is now that the Battle of Berlin attacks were a tragic operational error; one that would have led to the elimination of RAF Bomber Command well before the destruction of Berlin – had the raids not being stopped in March 1944.