On 21st November 1806, whilst still in the Prussian capital city, French Emperor Napoleon Bonaparte announced his Berlin Decree and the adoption of the "Continental System" that brought France and all of its occupied territories and allies under the same rule, introducing a blockade of Britain.

Britain and France have fought each other often over the centuries and were at war with each other in the early 1800s. 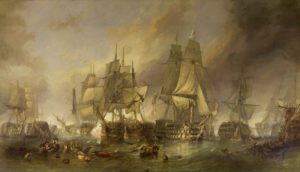 Following the defeat of Napoleon’s navy by the British at the Battle of Trafalgar on 21st October 1805, the French Emperor realised that he had no chance of successfully invading the island nation so sought another approach to bring his enemy to its knees.


From 16th May 1806, the British navy blockaded ports along the coastline of Continental Europe, from Brest to the estuary of the river Elbe, but having defeated the Prussian army at Jena and Auerstädt on 14th October 1806, Napoleon entered the city of Berlin on 27th October 1806 and set about planning the defeat of his arch enemy, Great Britain. 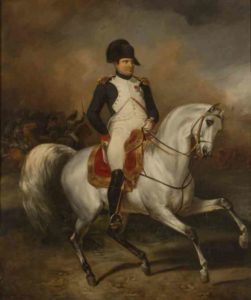 Aware that Great Britain depended heavily on its trading abilities to sustain its position in the world, Napoleon realised that if he could deny his foe opportunities to trade within Europe, he would be able to starve the nation into surrender.  So, on 21st November 1806, whilst still in the Prussian capital city, Napoleon announced his Berlin Decree and the adoption of the “Continental System” that brought France and all of its occupied territories and allies under the same rule, introducing a blockade of Britain.  This meant that no vessel coming directly from the island or her colonies would be allowed into any port under French control.  Correspondence and trade with Great Britain by countries under French rule would also be forbidden.

Britain’s reply to the Berlin Decrees were the 24 Orders in Council, issued on 11th November 1807, which confined Europe’s trade to neutral shipping. Britain controlled and taxed neutral trade with Europe by making all vessels proceed via British ports. 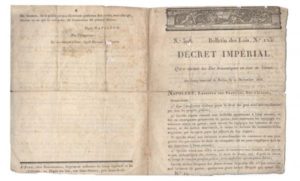 Napoleon responded by issuing on 17th December 1807, the Milan Decrees, which ordered that all ships touching British ports before sailing into French territorial waters were to be confiscated. This meant that any country obeying Britain’s Orders in Council was punished by the French. Neutral countries, including America, risked detention by the Royal Navy or confiscation in Napoleon’s ports. America’s response was to  place an embargo on trade to both countries.

Like Napoleon, the Decrees and the Continental System eventually failed.  There were too many ports that the British could still use.  This and the subsequent Peninsular War and defeat by Russia in 1812 led to the spiralling first demise of the French Emperor and his Continental System.

All Posts »
PrevPreviousThe best Christmas markets in Berlin – Our top five!
NextPulling back the curtain on Christo’s ReichstagNext